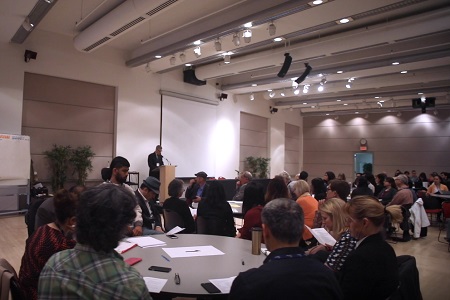 The Laurier occasionally collaborates with governments on their special events to inform public policy on important issues related to our mission and values. These have included federal initiatives, such as the Canadian Race Relations Foundation’s Vancouver Urban Agenda program or its Living Together Richmond Symposium. In June of 2018 The Laurier Institution collaborated with several agencies to support the City of Vancouver’s Annual Immigration Summit. This event convened refugees and asylum-seekers from many different countries, settlement professionals, academics and other community leaders, as well as policy makers from three levels of government. The focus of the Summit was to develop better policies to reduce poverty among refugees and asylum-seekers.
One of our directors, Sharad Kharé, generously donated a series of short films to the Summit: these were edited interviews with former refugees and asylum-seekers, including subtitled translations. For privacy reasons, these films regrettably cannot be shared. Our Chair moderated the Summit as a volunteer, as well as participating on the planning committee convened by the City. We also provided three Laurier Interns, who were international students, to support the dialogue tables as note-takers.
WATCH VIDEO

In partnership with universities and other public institutions, The Laurier Institution presents public programs on important topics of current interest related to our mission. Many of these programs have been partnered with CBC Radio IDEAS. Sometimes the Laurier seeds annual events by providing initial funding support; in other cases, the Laurier provides ongoing financial and programmatic support. Valued university partners have included UBC, VIU, SFU, Ryerson University, and the international partners of our “Us and Them” series. 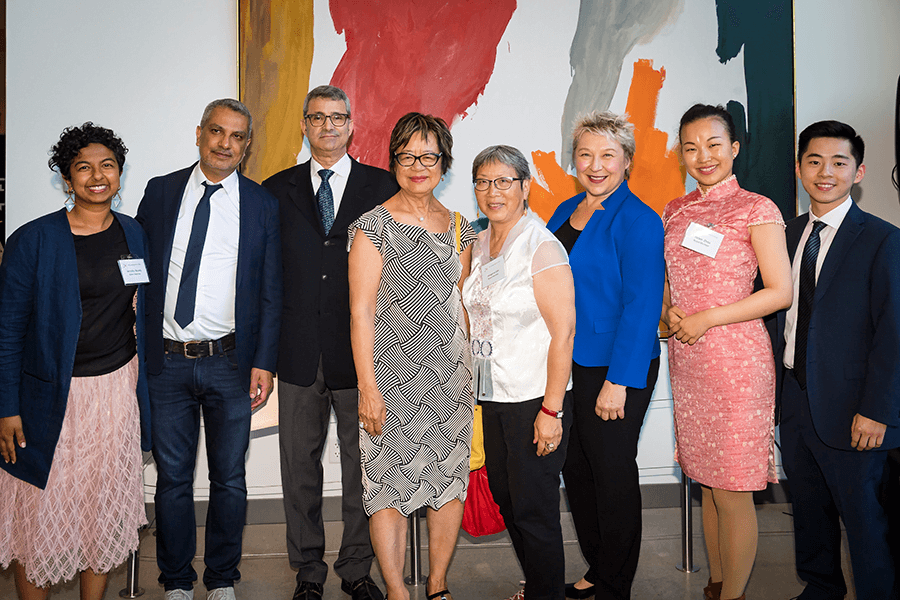 For many years The Laurier has presented an annual or biannual public presentation on multiculturalism. The speaker was selected in collaboration with CBC Radio IDEAS and a university partner. This signature program was co-presented for several years at the University of British Columbia. The 2018 Milton K. Wong Lecture featured Kamal al-Solaylee and was presented at the BMO Theatre Centre in collaboration with SFU’s Morris J. Wosk Centre for Dialogue and SFU Public Square. 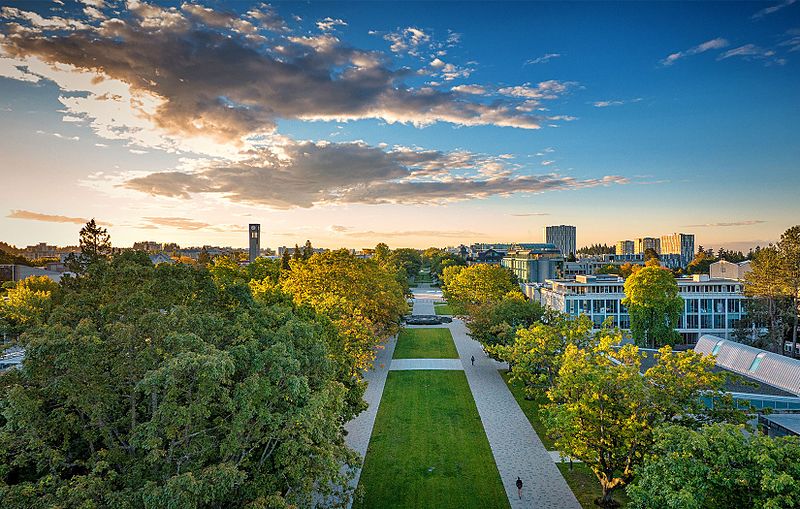 In 2016 The Laurier Institution co-founded and provided UBC with an initial three years of seed funding to support an annual lecture in Vancouver at the University of British Columbia on global Indigenous rights. This was a collaboration between the Laurier, UBC’s Institute for Critical Indigenous Studies, and UBC’s First Nations and Indigenous Studies Program. Subsequently, in 2019, a generous donation was made to UBC by former Laurier Director, John P. Bell, whose support provided an additional 10 years of funding for this important initiative, which was renamed the John P. Bell Global Indigenous Rights Lecture. We are delighted to see the fruit of this investment being sustained at UBC.

The inaugural presenter was Chief Wilton Littlechild (2016). Subsequent speakers included Victoria Tauli-Corpuz (2017), Sheila Nicholas (2018), Dr. Dalee Sambo Dorough (2019), and Dr. Mariam Wallet Aboubakrine (2020). The Laurier Institution has been proud to collaborate with UBC on several public programs over the years and looks forward to continued opportunities to collaborate with UBC. 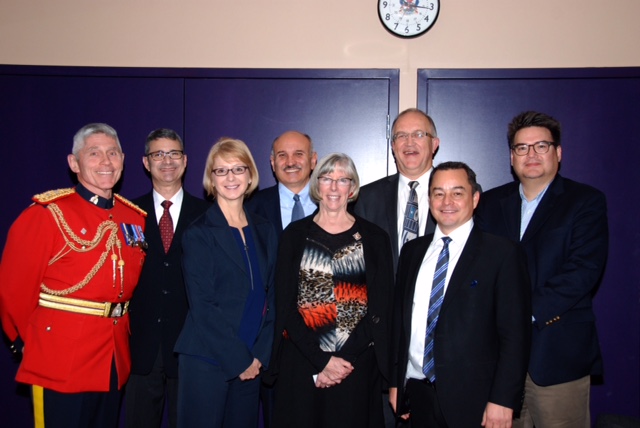 In 2015 The Laurier Institution co-founded and provided Vancouver Island University with an initial three years of seed funding to support an annual Indigenous Peoples Speakers Series. This was also a partnership with CBC Radio IDEAS, with whom The Laurier had partnered on similar public programs. The event would be held each year in Nanaimo, BC on the traditional territory of the Snuneymuxw peoples. The lectures would be hosted by VIU’s Centre for Pre-Confederation Treaties and Reconciliation, with involvement from VIU’s Shqwi Qwal for Indigenous Dialogue. The Shqwi Qwal (or “Speaker” in the Hul’qumi’num language) at the time, and the inaugural speaker in this series (along with VIU Prof. Doug White), was Chief Shawn A-in-chut Atleo, past chancellor of VIU and former national chief of the Assembly of First Nations.

Subsequent speakers in this series were Dr. Tracey Lindberg (2016), Gabrielle Scrimshaw (2017), Douglas White III (2018) and Max FineDay (2019). The Laurier Institution was privileged to support the establishment of this signature national series and looks forward to future opportunities to collaborate with Vancouver Island University.

Periodically the Laurier convenes roundtables on important topics. Each roundtable is by invitation, and the discussion is expected to be off the record, in order to enable deeper dialogue amongst participants. A thought leader sparks each dialogue, which is facilitated by a Board member. Invitees encompass a broad range of fields of expertise, lived experience, perspectives, genders, ages, and many other differences. Sometimes these events are in partnership with other organizations. Several seats are always allocated for Laurier members on a first-come, first-served basis. Invitees might include diplomats and other public officials, journalists, community activists, researchers, business leaders, civic and cultural community representatives, and students. Refreshments are always served. In the two sample roundtables described below, nearly half the invitees were students. 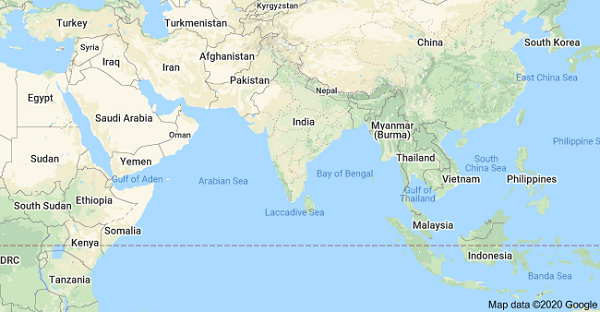 In 2016, the Laurier convened an inter-disciplinary, inter-generational round-table dialogue featuring Associate Professor Christine Fair from the Security Studies Program at the Edmund A. Walsh School of Foreign Service at Georgetown University in Washington, D.C.  Partners included SFU’s Morris J. Wosk Centre for Dialogue, the Embassy of the United States in Ottawa, the U.S. Consulate in Vancouver and the Churchill Society of British Columbia. In addition to several community members and consular officials, participants included undergraduate and graduate students from SFU and UBC, as well as faculty with research interests related to the topic. 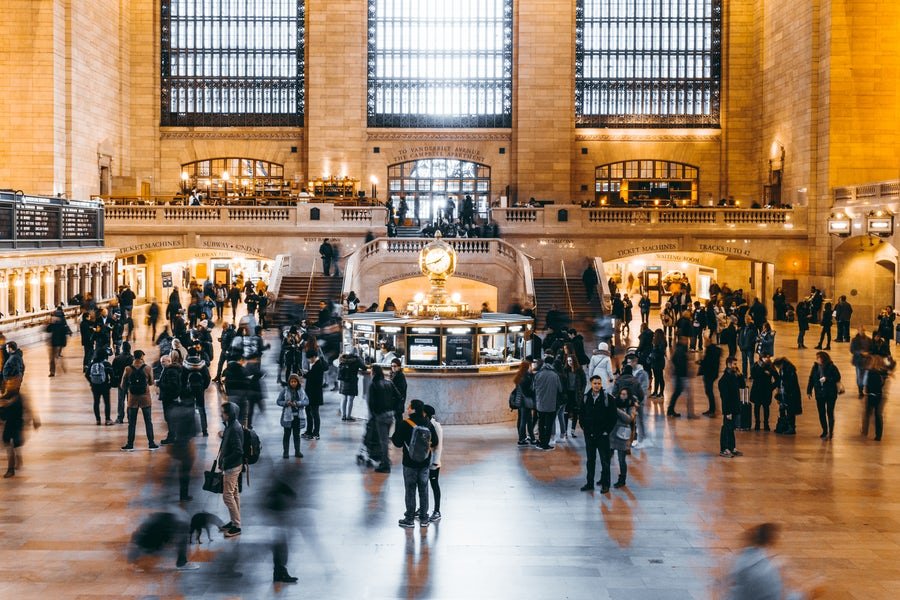 Shortly before the 2016 presidential election in the United States, the Laurier convened an inter-generational and interdisciplinary dialogue sparked by two former Members of the U.S. Congress: one Democrat and one Republican. Each former U.S. Representative had served on committees related to foreign and security affairs; both were retired senior officers in the United States military.  Both guests also had served in local government. Their visit was part of a speaking tour at postsecondary campuses across Canada. Partnering with the Laurier Institution for this event were SFU’s Morris J. Wosk Centre for Dialogue, the Vancouver School Board’s Engaged Immigrant Youth Program, the Embassy of the United States in Ottawa and the U.S. Consulate in Vancouver. Attendees included a diverse mix of community members, as well as faculty, graduate and undergraduate students from SFU and UBC. Six of the participants were high school seniors or undergraduates affiliated the Vancouver School Board’s Engaged Immigrant Youth Program. These participants included former refugees from conflict zones, including Syria and Afghanistan. Because of higher attendance than anticipated, one of the former Syrian refugees was seated in a chair borrowed from the Office of SFU’s President.

Over the years we collaborate with other organizations. 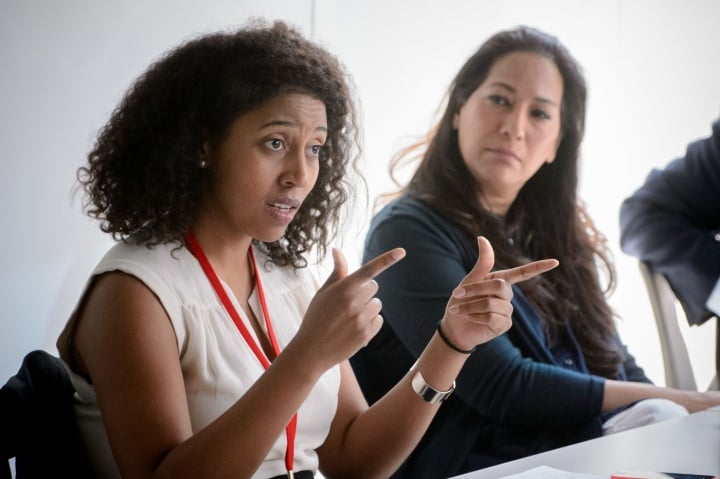 The Laurier Institution has collaborated with various partners on conferences, workshops, symposia and other programs aligned with our vision, mission, values and resources. Our partners have included academic institutions or departments, local and national NGOs, media, governments and Crown agencies. We welcome inquiries about future opportunities to collaborate. 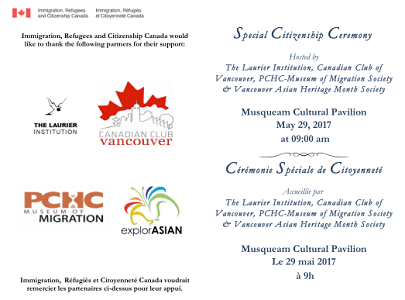 When we were invited to pursue this event by the other partner agencies and the IRCC, we were mindful of the extraordinary complexity of hosting a Canadian citizenship ceremony one month before Canada’s 150th birthday at the Musqueam Village, where Musqueam people have lived for over four thousand years, and whose roots in their traditional territories go back thousands of years. Why host a ceremony in the heart of the Musqueam Village for settlers, new citizens of a country, whose Crown had displaced and colonized Indigenous peoples?
LEARN MORE

Information about this initiative will be available soon. 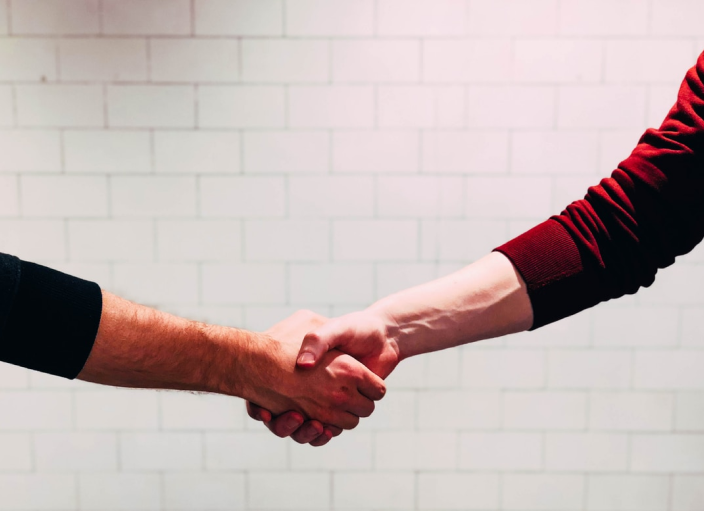 We welcome discussions with potential partners that share our values and mission of inspiring action around equity, diversity and inclusion. Please contact The Laurier Institution through the following form.