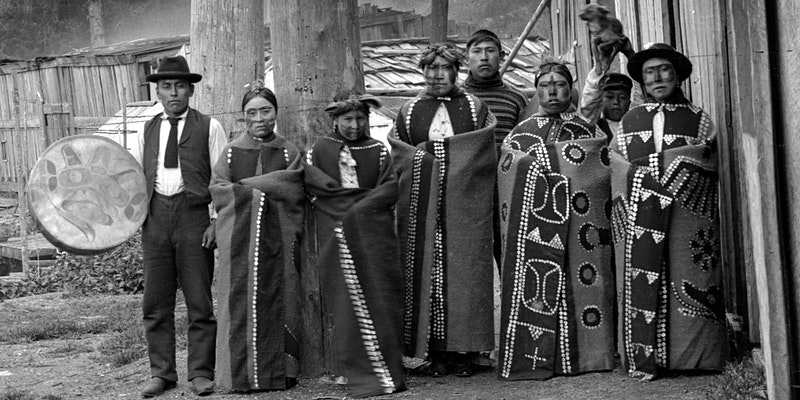 Knowledge Network’s “British Columbia: An Untold History” is a four-part look at the complicated histories that shaped BC as we know it today. The series weaves together the stories of Indigenous, Chinese, Japanese, Punjabi, Black, and European people that formed this complex place.

In observance of the National Day of Truth and Reconciliation, a special community screening of “British Columbia: An Untold History” was co-hosted by the Laurier Institution, Chinese Canadian Museum, Simon Fraser University Morris J. Wosk Centre for Dialogue, Knowledge Network, Pacific Canada Heritage Centre – Museum of Migration, and the Chinese Canadian Historical Society of BC.

The featured episode highlighted the perseverance of Indigenous peoples through years of oppression and criminalization in BC. Let this part of Canadian history be understood and remembered.

The event began with a welcoming address from Elder Larry Grant of the Musqueam Nation, whose traditional territory includes the unceded land where the city of Vancouver now sits. After words of welcome in Halkomelem, Elder Grant introduced the event as an important look at the past and ongoing injustices committed against Indigenous people in what we currently know as British Columbia.

Representatives from each of the host organizations also spoke briefly to open the event and contextualize the importance of the topic. To summarize: making sure the untold stories of this land are told is key to meaningful reconciliation. Many of these stories reveal shared struggles, collaboration, and insights into a way forward. The conversation is finally beginning to shift and the more history and understanding we can bring to the table, the better.

The first episode, “Change + Resistance,” was screened as the series’ public premiere. The episode focuses on the Indigenous communities of the province from the arrival of the first European settlers in the eighteenth century through the residential school system of the twentieth century. Through interviews of Indigenous people, historians, and professors, the episode highlights many untold stories of oppression, disenfranchisement, and forced assimilation.

After the screening, Elder Larry Grant and series’ director Kevin Eastwood spoke on a panel moderated by Wendy Yip of the Pacific Canada Heritage Centre – Museum of Migration.

The panelists discussed the enormous wealth that has been stolen from Indigenous people in this province. That wealth takes the form of land rights, natural resources, cultural practices, and knowledge. The Indigenous peoples of this land were engineers, mariners, botanists, and more with thousands of years of research, passed down knowledge, and generational memory. Perhaps it is time we looked at that wisdom to teach us how to care for this place. What is already known can inform modern salmon fishing and forestry practices. It can help affect climate change.

A New Name For British Columbia?

British Columbia is named for those who attempted to make indigenous people disappear so settlers could reap the benefits of the land. It is time we start questioning the name of our province. Prior to the last, relatively short 150 years, the province was known by other names, yet both parts of its current name come from colonialist notions. Potential difficulty arises when considering the large range of Indigenous languages and dialects spoken in the province. How do we bring these languages together to a collective agreement of a new name?

How We Move Forward

We all need to participate in recognizing humanity at an equitable level and enact change to challenge unconscious biases. It is our responsibility to create honest relationships and equitable policies to move forward together. This includes a hard look at school curricula and pondering the tough question: Why do we study Britain’s subjugation of its colonies but not the peoples it has subjugated? This includes recognizing the traumas of being denied culture, art, spiritual belief, language, and way of living. It is time we respect each other in our differences and our sameness. A goal of the residential school system was to assimilate Indigenous people within a generation. Maybe now the goal should be positive transformation within a generation.

“British Columbia: An Untold History” – Where to Watch

Change + Resistance (Available now)
Uncovers the Indigenous resistance to oppression in BC. First Nations persevered through years of brutality and criminalization – remembering this history is an act of refusal to be erased.

Labour + Persistence (Available now)
Explores the history of labour and inequality in BC. First Nations, immigrants and women fought overseas in both World Wars, and then kept fighting for equal rights at home.

Nature + Co-Existence (Available November 2)
Examines how the history of BC is inseparably fused with the history of natural resources. First Nations have worked with non-Indigenous environmentalists to co-exist and protect the land.