Humans emerged in Africa 150,000 years ago when the plains were filled with animals in variety and abundance beyond anything we know today. As we moved into new territory, with simple tools like spears and stone axes, we were able to capture animals and even drive them to local extinction. Over time, we had to move to new territories or stay and learn to live in balance with resources at hand. Soon, the planet’s continents were fully occupied and developed with indigenous cultures that understood the hard-won lessons of sustainability.

But over the past five centuries, a wave of immigrants to new lands came with a radically different sense of the land from the indigenous people. Land to them was opportunity, a commodity to be exploited, developed and sold.

Over the past century, we have had the remarkable confluence of population growth, technological innovation, hyper-consumption and a globalized economy. This is the Anthropocene Epoch. Humans are now the dominant factor shaping the planet, but in the process, we are undermining the very life-support systems of air, water, soil, photosynthesis and biodiversity.

In such uncertain times, we must look to biology to find a strategy for survival. The key is diversity at the genetic, species and ecosystem levels. Canada is an experiment in diversity through its program of multiculturalism. I believe that, as in biological diversity, our diverse backgrounds provide a rich resource of perspectives, experience and ideas that will be important in an increasingly uncertain world. 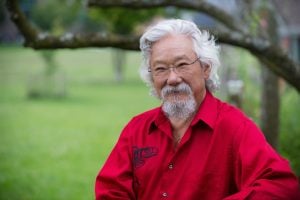 Dr. David Suzuki is a scientist, broadcaster, author, and co-founder of the David Suzuki Foundation. He is Companion to the Order of Canada and a recipient of UNESCO’s Kalinga Prize for science, the United Nations Environment Program medal, the 2012 Inamori Ethics Prize, the 2009 Right Livelihood Award, and UNEP’s Global 500. Dr. Suzuki is Professor Emeritus at the University of British Columbia in Vancouver and holds 28 honorary degrees from universities around the world. He is familiar to television audiences as host of the CBC science and natural history television series The Nature of Things, and to radio audiences as the original host of CBC Radio’s Quirks and Quarks, as well as the acclaimed series It’s a Matter of Survival and From Naked Ape to Superspecies. In 1990 he co-founded with Dr. Tara Cullis The David Suzuki Foundation to “collaborate with Canadians from all walks of life including government and business, to conserve our environment and find solutions that will create a sustainable Canada through science-based research, education and policy work.” His written work includes more than 54 books, 19 of them for children. Dr. Suzuki lives with his wife and family in Vancouver, B.C.

On Wednesday June 27, 2018, the Milton K. Wong Multiculturalism Lecture was held at the